Many say that I am defiant. Defiant in both a good and bad way.

It’s just… I like doing the opposite of what people say that I shouldn’t do or can’t do.

My defiance is what helps me defy the odds.

My defiance is a good quality I possess because I will defy any odd by not listening to what people think I should do or suggest how I should live my life.

I am Defiant and Proud. ~ DoctorK 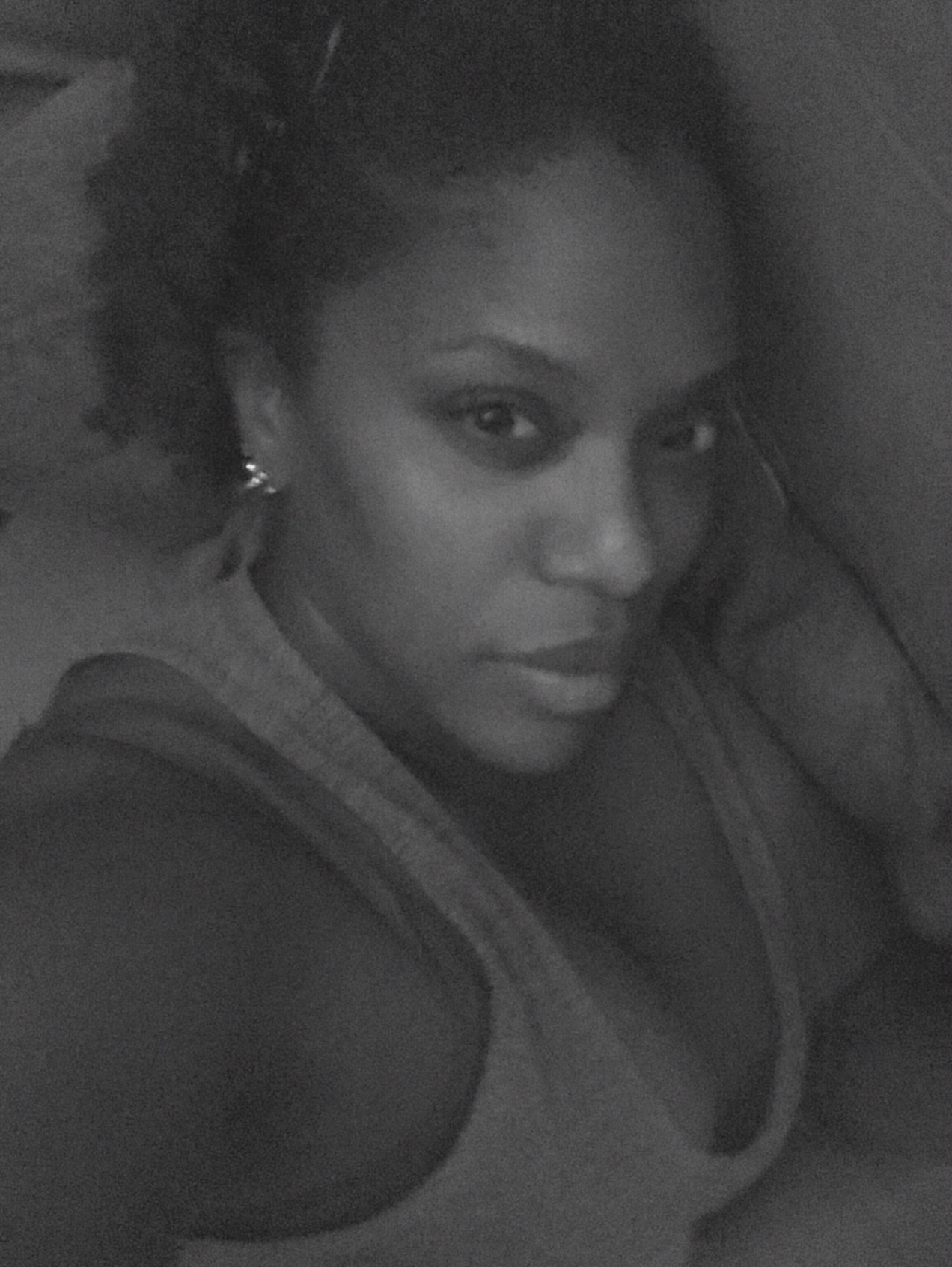 Today is day two of my water 💦 fast.

Last night my head was killing. I’m not going to lie I wanted to eat just so that I could relieve the pain but I didn’t. I meditated and then took a shower for about an hour. I also meditated in the shower, it definitely helped a great deal. I felt so at is and it probably because my focus was not on my pain but on my breath.

This morning I did feel a little nauseous but a drink of water helped me feel better. Justin really doesn’t like it when I feel bad. He tried to cater to my every need but he knows I am fasting, so the only thing he could do is bring me a class of water. 😊

I must say I had a lot of clarity last night. Visions of the future appeared to me. I have a lot to look forward to and is excited about it.

Oh I forgot, day two last time was horrible. I was weak barely wanted to get up out of bed. I couldn’t even do my workout until later that evening. Because out of no where at the end of the day I got this burst of energy and completed a full body workout. I felt great after I completed my workout. I was ready for the next day. I didn’t get a workout in this morning but I will this evening.

I got this!! Motivated to keep going

Sometimes, I️ think Justin thinks I’m not watching or aware of what he’s going through. I️ see and know when things are a challenge. I️ also Know when he’s going to have a hard day. I️ just remain and present, so when he needs I’m always right in front of him watching and waiting for him to say “Mom”…

So a few months ago Justin decided on his own to go partially vegan. He’s been eating mostly at home due to wanting to keep to his new eating habits. I one day wanted Chinese food so I ordered Egg Foo Young and Justin order Broccoli with rice. As I’m eating my food he’s looking at my food with interest. So he ask me what is it. I explained to him what it was. Egg Foo Young is one of the only things I order from the Chinese restaurant besides chicken wings with fries, shrimp with broccoli, broccoli with rice, and vegetable lo mein.

Justin kept looking at my plate and I knew what was about to happen next. He was going to ask if he could try it. Sure enough he asked and I gave him some only giving him the smallest piece of it as possible just in case he doesn’t like it. Well! He liked it! I’m always happy when Justin tries and likes new foods. He proceeds to say, maybe I can start ordering that from now on. I smiled 🤗 and said Sure!! 👏🏾👏🏾👏🏾👏🏾.

Tuesday we ordered Shrimp Egg Foo Young for lunch. We ordered it to go so that we can watch a movie together while having lunch. As I made my plate I poured gravy on my food. Justin walks in to the kitchen comes back with syrup in his hand. So I ask him, what is that for? He says “my food” 🤢.

I watched in disgust as he poured syrup over his food. I then said “ Justin Syrup doesn’t go with Egg Foo Young” he replied with “ I don’t think gravy goes with it either but we both like what we like, you like gravy and I like syrup”

All I could do was laugh and agree with him.

He definitely has a point. So I left it alone and ate my food in peace.

I’m wondering 🤔what other ways can Egg Foo Young be eaten besides with gravy and syrup?

There are many times to where I am amazed at the way Justin thinks. We’ve been talking about doing things that make him happy. At first Justin did not want to do Marching Band. But once he gave it a shot he fell in love with it.

Because the upperclassmen doesn’t like the new Marching Band teacher most of them wants to quit.

So I asked Justin does he want to quit?

His response: ” No, I’m not quitting because I don’t like the teacher, I’m doing Marching Band because I Love Music”

Despite what’s around him he plans to continue to do what he loves. He doesn’t like the negativity of his friends talking about the teacher so he said he just listen and does what’s best for him.

I said Wow Justin, it takes some people years to learn how to do things for what they have a passion for and not follow others.

He said, well you teach me to do what I love and stick to it. You also allow me to be myself and do what makes me happy.

That was truly a proud Mommy moment. Sometimes I question if I’m doing a good job and from the talks of it. I am. 😊

Do It! Because it’s What You Want to do!! 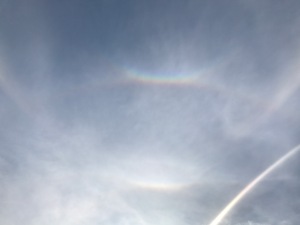 Growth can occur daily. Change always takes place when you want change. Some people like to hold onto to who you use to be. Never seeing who you’re becoming. We can get caught up by others hold on to our past selves. I know I’m guilty of it. It’s very frustrating when you’re trying to let go of who you were, when others still hold on to it.

I realized this week to allow them to hold on to what they believe of me because it’s their belief and way of thinking. The only persons thoughts and beliefs I can control is my own.

I am not what people think of me. I am not my negative thoughts. I am every positive thought I perceive myself to be.

Seeing the rainbows today was a reminder that I am on the right thinking and journey path. I am where I need to be. 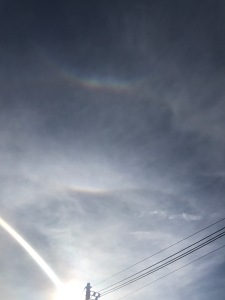 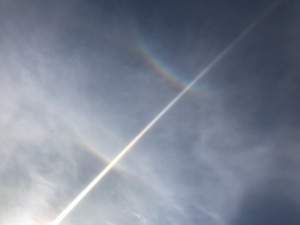 After a long day, Justin finds great pleasure in laying across my bed and talking to me. He said that there is something about my bed that helps him relax and clear his head. So I told him to relax away.

I can write forever about my relationship with my brother. One thing for sure is that I love him with all my heart. We’ve seen each other through the best and worse of our lives. We will always be there for each other no matter what. 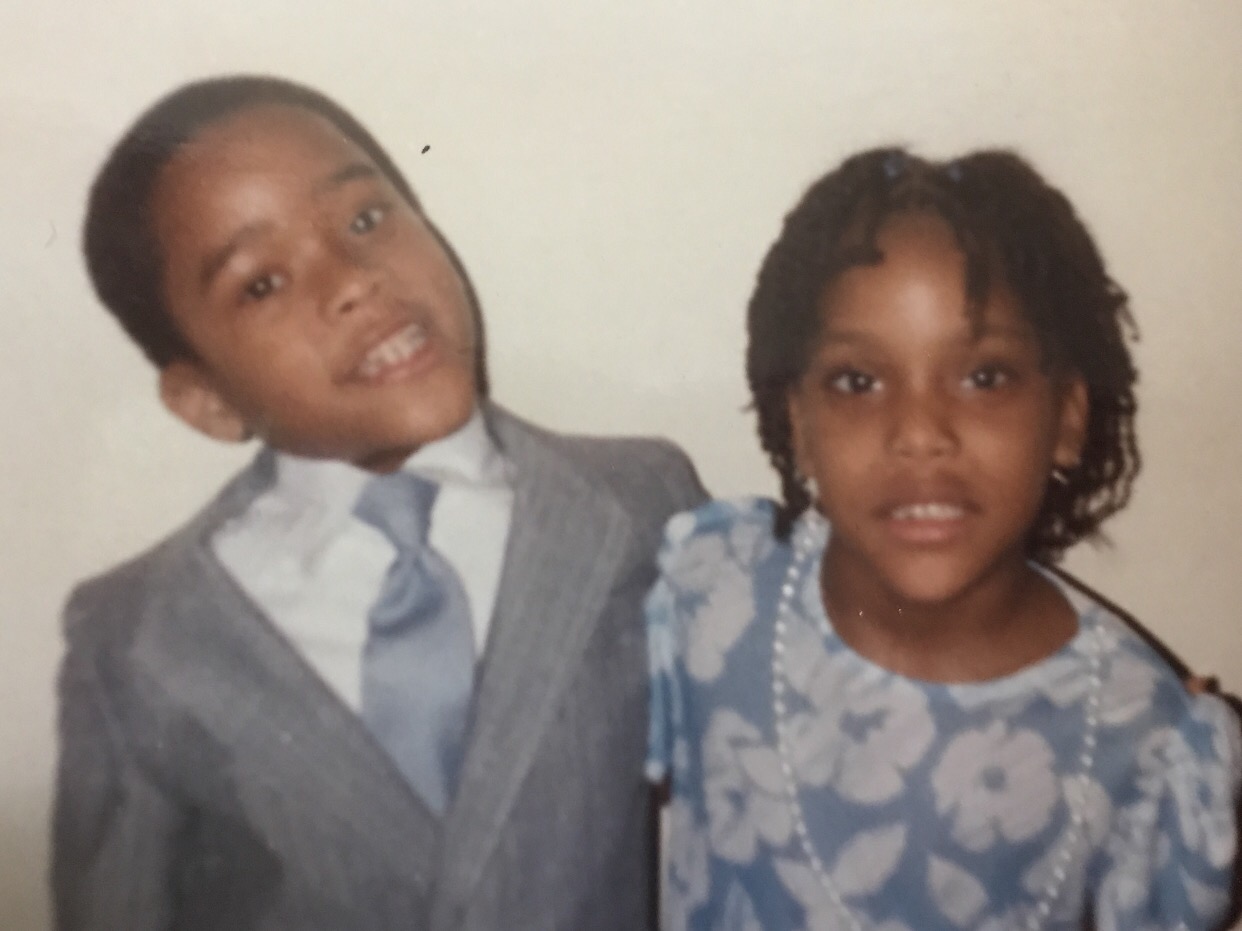 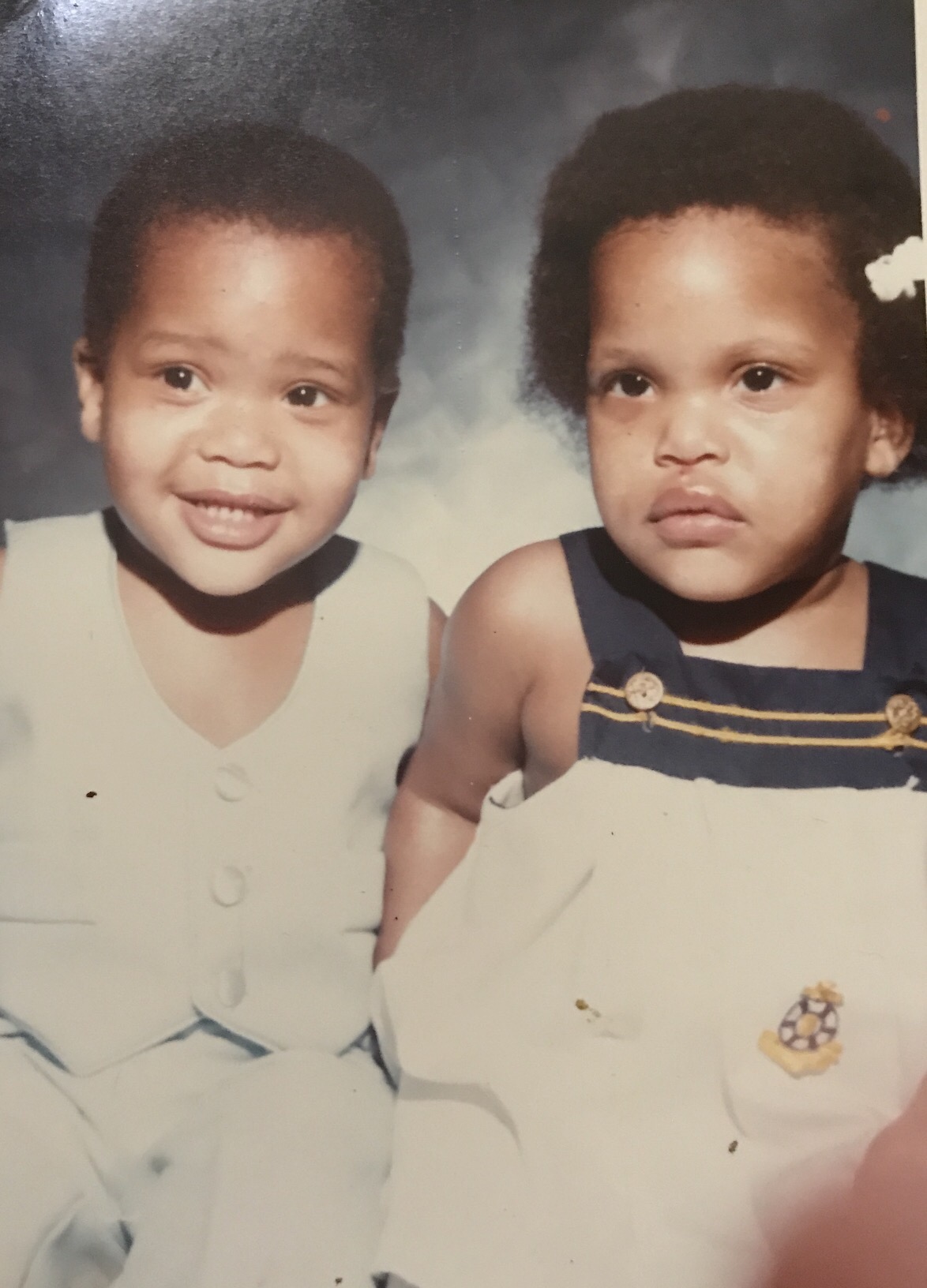 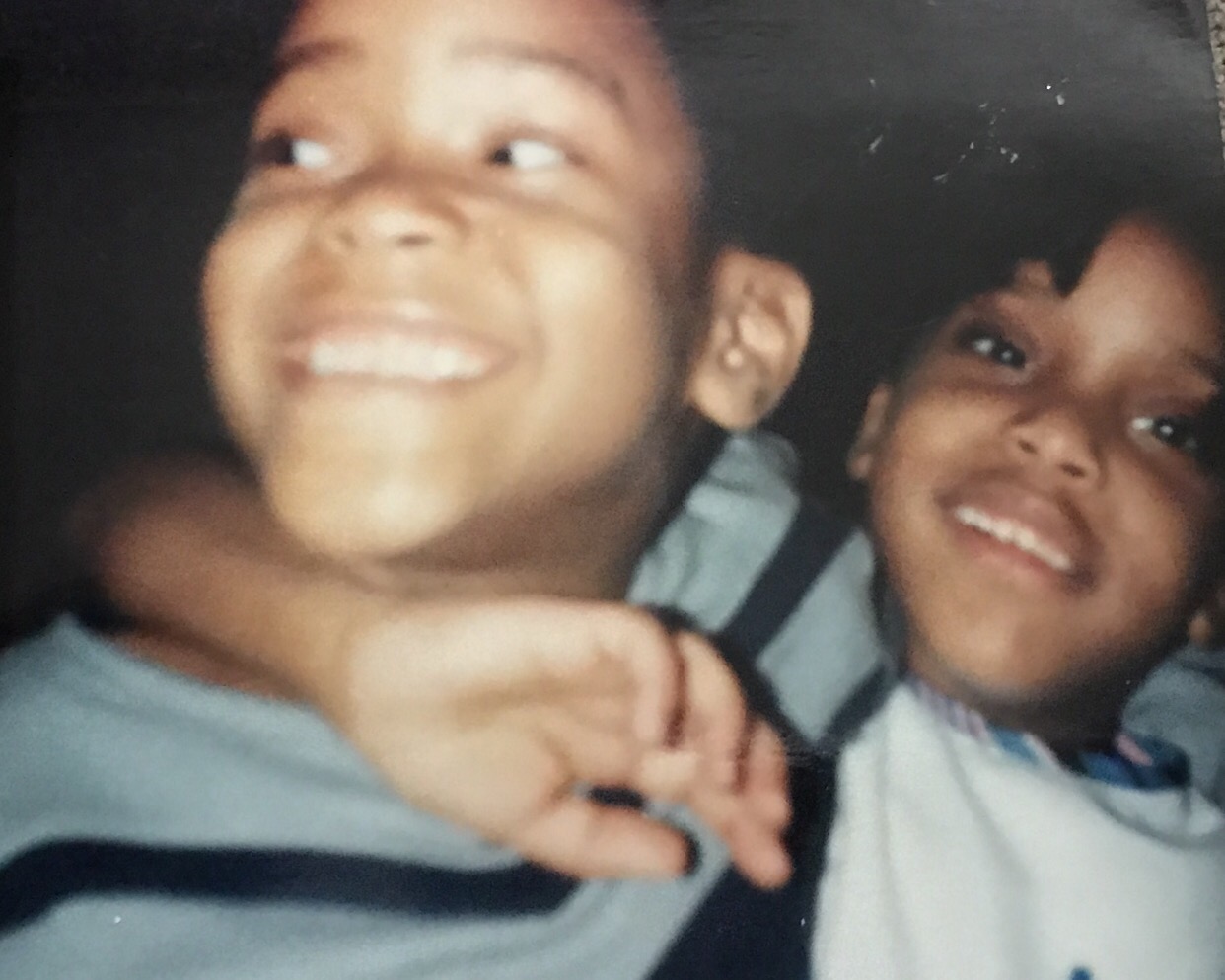 Yesterday, while Justin and I was going over the details of the photo shoot. He explained to me that his feelings are like the branches and the layers of the tree. He said some emotions you can see on the outside that is easy to explain. While other emotions are on the inside to where no one can see nor understand. I thought was a great analogy of his emotions.

I kid you not in the back of my mind I’m like I should be recording this for others to hear how he processes things. It’s amazing how he views and sees things. Listening to him process things openly helps me at times to understand him better.

I’m big on communication and being open and honest with your feelings. I allow him to be himself freely but make sure he respects me because I am his mother. I think that’s why we have the relationship we do.

I think Justin maybe on to something.

My sister is living in her purpose and has become a photographer. Today Justin will have a photo shoot with her capturing all of emotions he goes through throughout the day. I didn’t tell him about until Just now and boy oh boy I can feel the anxieties flowing.

What is it for?

What do I have to do?

Is this for the blog?

What emotions should I do?

I’m sure in his mind he’s really like, you pulled me out of Band practice for this! When I told him it was for a project, he said okay. But I can still feel his anxiety. I’m very mindful of what I say and how I say things to him. I don’t dismiss my emotions because I’m entitled to feel the way I do they same way I allow him to express them.

On another note. Wish us Luck! Today will be a great day because I Believe it will be. 😊